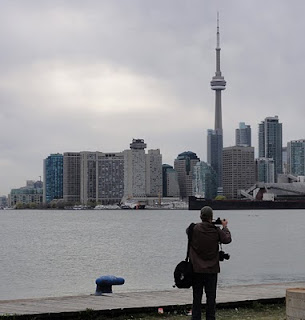 It was in the last snowy days of winter in 1975, the CN Tower was still under construction, nearing its completion when I arrived in Toronto. I was young, fully unaware that in the next few weeks, another chapter would unfold in the history of the city that I had chosen to be my new home.


In the early spring that followed, I witnessed the defining moment. From the window of a sign shop on King Street West where I landed my first job, I was in awe as I watched the huge helicopter position the final top section of the CN Tower, making it the tallest free-standing structure in the world, a record it held for over 30 years.
Now, more than three decades later, the iconic landmark of Toronto is still standing mighty proud, reflecting the undying pride of Torontonians and the rest of Canada. It always stands there enduring all four seasons. Like a lighthouse, it patiently waits and untiringly welcomes the arrival of new immigrants, who in their own way would contribute to the continuing progress of the city, bringing new ideas and harmony to the city’s diverse society.
In the years that I have lived in Toronto, I withstood the test of 35 winters. The first one was the toughest. I was not prepared for it, but the great opportunities that the city had to offer kept me undaunted to resist the cold. I am glad I stayed. With Toronto’s rich heritage, colourful cultural events, special exhibits and direct interaction with various ethnic communities, I learned so much about the world without travelling the world. Toronto is indeed the city of all nations.
Toronto is my home. It is here in this great city where I planted my roots. I got married here; all my children were born here and they grew-up seeing the rapid growth of downtown skyscrapers and contemporary architecture that continually re-shape the cityscape of Toronto.
I remember when Toronto outgrew the city boundaries and became a mega city that included North York, East York, York, Etobicoke and Scarborough.
How can I forget the City’s 150th Celebration in 1984? I can still see the specially designated Sesquicentennial TTC streetcar sporting red, white and blue stripes, adorned with a wooden birthday cake perched on its roof. I remember the Filipino immigrant, assigned by the Toronto Transit Commission to airbrush the image of the City Hall on both sides of the streetcar. I remember how proud he was in contributing his talent to the city’s historic celebration.
I am that Filipino immigrant. I am now a citizen of this country and without hesitation, I highly consider myself as a Torontonian as do my wife and three daughters.
The Torontonian pride that I always carried with me was well defined by Mayor Miller’s speech at the City Hall’s Rotunda on January 18th 2010, when he acknowledged all of the talented photographers and their winning images in the “Building a great city – together” Photo Contest.
I feel deeply flattered that two of my entry photos were included in the winners’ gallery. But the most honourable part at the reception that evening was being among the amazing photographers who effectively conveyed the spirit of Toronto’s Diversity through the lens of their cameras. Our collective images have formed a beautiful mosaic that in itself is an art that truly embodies the essence of multi-cultural society in Toronto.
On behalf of my fellow photographers whose passion in photography and love for the city equal mine, I extend our heartfelt appreciation to all of the creative minds at City Hall who collaborated in organizing such inspiring categories for the most challenging theme.
Thank you, Toronto, for the great opportunity.
Posted by MARIO DIMAIN at 11:07 AM

Hi, Mario. Great blog! I found my way here via the Ace Alvarez blog. Do you know, we both arrived in Toronto the same year and I remember watching the completion of the CN tower, too. That big Sikorsky chopper adding the last piece... amazing!

I like your photography and your outlook on life. I'm sure you are enjoying your retirement as much as I am.