In the late morning of August 27, 2016, a battle erupted. No opposing armies and no shots were fired, yet the battle was real in a true battleground . . . on the grounds of Harrison Properties. 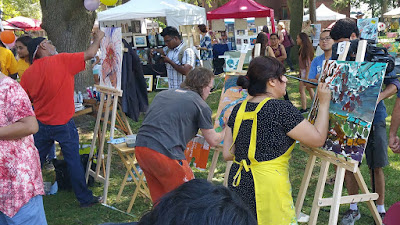 Armed with paintbrushes and a palette of paints, nine talented artists stood by their easels; all set and ready to unleash a barrage of colours on nine glistening white canvases. They were the nine contenders in the first round of the Art Battle hosted by Scarborough Arts.

The Art Battle was fired up by nine art lovers who were invited to pre-paint the empty canvases with any patterns and lines they could think of in five minutes. Then, the contending artists were challenged to transform what appeared before them into a work of art within twenty minutes! Needless to say, the open air at the park was filled with pressure and tensed anticipation. 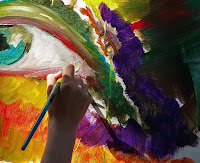 As the contenders battled it out, every minute ticked like a time bomb. Every brush stroke, every drop of paint, was a race against the clock. Like a trained soldier focused on a mission, the nine art-combatants remained calm and undeterred.

When the time was up and the brushes were down, only two remained standing. All eyes were now focused on the two young finalists, Frances Potts and Camila Wong. These equally good artists were poised for a duel.


As they faced the delighted crowd, it was obvious that these two contenders had different styles. Frances was fashionable in her apron-topped red dress and black sunhat while Camila preferred the more casual black pants and T-shirt. Although from the outside, they displayed distinctive contrast, surprisingly they were alike in choosing what to paint on the final piece. Unknown to each other, they both illustrated a human face. Was it a coincidence? Or was it a case of “Great Minds Think Alike”?

Both art renditions were impressive. The winning piece could go either way. But only the artist who captured the discriminating eye of the judges and the majority of spectators votes, would be declared the winner.

In the midst of thundering applause, Frances Potts stood victorious. It was her moment. She had won the Art Battle. Frances also earned residency with Scarborough Arts which included free exhibition space, a bursary for development, and access to Scarborough Arts facilities and mentorship. Most of all, Frances won a spot in the next Art Battle Canada Regional Championship.

At the end of the day, when the battle had subsided, there was no bloodshed; just a few drops of acrylic paints on the ground where the easels once stood. The collective display of art pieces from the contest could easily form a mosaic of what Scarborough Arts stands for: “Bringing art to the community and community to the art.” 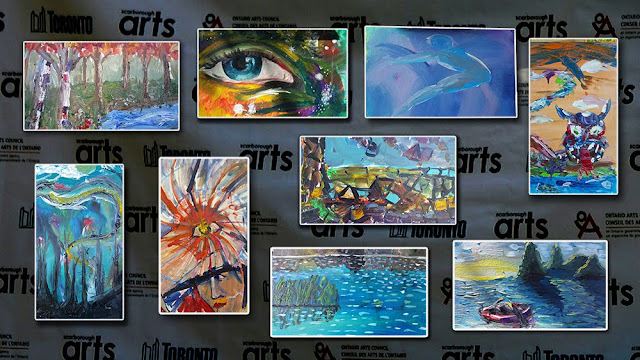 If all battles waged in our hostile world were fought with brushes and paints in the name of harmony, there will be no hatred and vengeance; only lasting peace among nations.
Posted by MARIO DIMAIN at 7:33 PM

What a fantastic event, Mario! The atmosphere looked positively buzzing. That would have been just my kind of day.

Great work and write-up Mario. You really made the Art Battle come alive. Thanks for showing all of the artist's paintings. I missed some of their colourful work the first time.